We’ve been bragging about this truck from the beginning, but now we can officially say the 2014 GMC Sierra is the “Best New Pickup” in Canada, voted by the Automobile Journalist Association of Canada (AJAC). The all-new Sierra is the most powerful and technologically advanced truck in GM’s 111-year history. 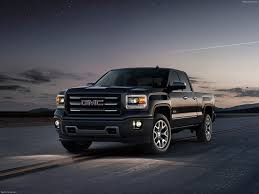 Last October in Niagara Falls, 147 vehicles were tested and evaluated by 80 journalists who voted on the vehicles, combined with objective data.  Each journalist drove each categories’ vehicles back-to-back in the same day, under same conditions on closed roads to ensure fairness.

Rob Assimakopoulos, General Director of Marketing and Communications for GMC in Canada, said the following about the distinction, “With the importance of the pickup truck segment in Canada, we thank AJAC and its membership for this significant award recognizing the GMC Sierra as the best new pickup in the country.  The Sierra is the definition of GMC’s Professional Grade mantra, featuring the most advanced engines in a pickup with a unique combination of technologies delivering legendary GMC capability.”

We know how great the Sierra is and we encourage you to visit us at Queenston on the Mountain and experience its power and comfort for yourself.  Right now, until December 9th, take advantage of our 0% On Everything Event and drive home your new Sierra today!

If you love pick-up trucks like us, then you are as excited as we are about the newly redesigned 2014 Chevrolet Silverado and GMC Sierra.  In fact, General Motors is so proud of these outstanding trucks, they have put together the event of the year – The Silverado Sierra Tour!

The Silverado Sierra Tour gives you the unique opportunity to drive these two trucks on a closed course test drive with driving event modules, so you can put the all-new 2014 Silverado and Sierra to the test!  Each session runs for a duration of 1.5 hours and is completely free to you. You will also be provided with a thank you gift and have the opportunity to win some fabulous prizes.

Each person interested in participating, must register the event separately.  It also requires that you be 21 years of age and possess a full valid driver’s license to participate.

As can be expected, this consumer opportunity is extremely limited and will run on a first come, first serve basis.

The event began on June 5th and will continue to run across the country until August 28th!  The schedule dates are as follows:

With such limited spots, make sure you register for the Silverado Sierra Tour today! (Click here to register)

If you have any questions, please visit www.queenstonchev.com or follow us at Hamilton Auto Blog for updates.

The Canadian Truck King challenge takes place each year. It is a head-to-head competition among six pickup truck manufacturers that involves driving the trucks back to back over a two day period. A group of automotive journalists tested the trucks under certain criteria to evaluate the trucks’ performance, inside and out. Trucks were tested on and off road, they were loaded and unloaded, they towed trailers, and they were tested on evaluations of ride and handling, among other tests.

After 2,600 km of testing, the 2013 Chevrolet Silverado 3500 HD was crowned Canadian Truck King for 2013. It beat the Ford 350 and Ram 3500 to take first place.  “The heavy-duty truck segment is one of the most competitive in Canada and it’s an honour to have the Silverado HD officially crowned the Canadian Truck King for 2013,” said Sharon Sikorski, GM Canada marketing manager for trucks.

The 2013 Silverado 3500 HD is powered by the Duramax 6.6L turbo-diesel engine, and a 1000 six speed automatic transmission powertrain combination. This powers the truck with 397 horsepower at 3,000 rpm, and 765 lb.-ft. of torque at 1,600 rpm.  It also features a high pressure fuel system for greater fuel efficiency and reduced emissions, and the list goes on. What can be said is that this truly is a powerful truck.

If you would like information on the Silverado or any of the Trucks in our award winning Chevrolet line-up, please visit us at www.queenstonchev.com