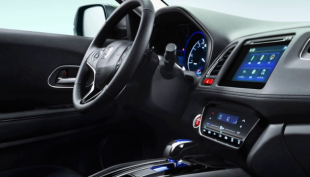 After a brief hiatus, the Honda Ridgeline is back, delivering superior driving dynamics with the largest interior space offered in a mid-size 4 door pickup.  Revealed in Detroit on January 11th at the North American International Auto Show, the Honda Ridgeline sets new benchmarks for versatility and comfort.

Designed, developed and manufactured in the U.S., the 2017 Ridgeline will launch in the first half of 2016.  Designed to suit the needs of the “every day” driver, there are a number of features and capabilities that are unlike anything else in today’s market. Such features include:

The new design, based on Honda’s Global Light Truck platform, has a rigid yet lightweight unibody construction, with fully independent suspension.  As such, it helps to deliver an excellent ride with even better handling.  Powered by a 3.5 litre, direct-injected, i-VTEC V-6 engine with automatic transmission, the Ridgeline provides segment-leading EPA fuel economy ratings.  For the first time ever, we are excited to announce that the Ridgeline will be available in both front wheel and all-wheel drive.

On the interior, the 60/40-split and folding second-row seats not only provide convenience, but give you the versatility that you need.  When folded down, the truck can comfortably seat 5 passengers while still accommodating larger items that can be stored under the seat such as a golf bag.

If you’re looking for the convenience of hauling large loads, the truck bed on the Ridgeline is like no other.  At 5’ wide and 5’4” long, the 2017 Honda Ridgeline is the only vehicle in its class able to offer 4-foot wide flatbed space.  Additionally, the composite of the bed is UV-stabilized and scratch resistant and comes with a dual action tailgate, available 400-watt AC power inverter and the industry’s first in-bed audio system.

With so much excitement surrounding the 2017 Honda Ridgeline, you’ll want to be sure to follow us at Hamilton Auto Blog for the latest updates. As always, please stop by and visit us online at Image Honda or in person. Car and Driver has released their exciting list of 10 Best Cars for 2016 and it’s an impressive lineup.  Every year, Car and Driver enters a weeklong evaluation, looking for these new and improved vehicle virtues: value and engagement, performance and poise, sights and sounds, soul and character.

“It’s our job to unearth gems. Cars on the 10 Best list should have your neighbors asking questions, sometimes relating to your sanity. Issues of personal taste, social conformity, and other base impulses rarely factor in.”, says Eddie Alterman, editor at Car and Driver.

For us at Queenston Chevrolet Buick GMC and Image Honda, it’s exciting to see two of our models appear on this prestigious list. 2016 Honda Accord – “Someone who cares obviously headed development”, D. Sherman Visit us at www.queenstononthemountain for our full lineup of Chevrolet, Buick and GMC models and at www.imagehonda.com to view our exciting Honda cars, trucks, vans and SUVs.

How does Honda Canada celebrate its seven-millionth Honda vehicle built in Canada?  Well, they donate it of course! The grey 2015 Honda Civic EX sedan was given to the Annual Rally for Kids Cancer fundraiser for live auction, with 100% of the proceeds being donated to the Sick Kids Foundation!

This is one of many reasons why Image Honda is proud to be a part of the Honda Family. Honda Canada continually strives to be a company that Canadians are proud of, which is why the Honda Canada Foundation provides annual funding to registered non-profit charities across Canada “in support of science-and engineering-based education, environment and family initiatives.”

Each year, the Honda Canada Foundation gives back to the community and participates in local programs across the country to build a better community.  “The Honda Canada Foundation is committed to giving back to the communities where its associates and customer live, work and play and is involved with such programs as Earth Rangers Bring Back the Wild, Junior Red Riders, Let’s Talk Science, CP24 CHUM  Christmas Wish, Make-A-Wish Canada and the Ontario Science Centre.”

For more information on the Annual Rally for Kids Cancer Fundraiser, click here.

Stay connected and up to date with Hamilton Auto Blog for the latest Honda news and for ways you can help our community through special projects and initiates.

If you haven`t had the opportunity to view and test-drive the all-new Honda HR-V, now is the time to do so. In addition to its stunning appeal, advanced technology and affordable pricing, the new 2016 Honda HR-V has just received a 5-Star Overall Vehicle Score, the top score available in the National Highway Traffic Safety Administration (NHTSA) New Car Assessment Program.

Without a doubt, this is one Honda vehicle you must experience.  Visit us at www.Imagehonda.com to schedule a test drive or stop in and speak with one of our reputable sales consultants. As always, stay connected to Hamilton Auto Blog for the latest news at Image Honda.